Species Report: iNGO - About the Australian Dingo Skip to content

The Australian Dingo (Canis lupus dingo) is iNGO – an Apex Predator from the ANiMOZ Scrub BiOME!

About the Australian Dingo

iNGO the Dingo is an incredibly interesting and complex species which can often look just like a normal dog!

They are lean at about 16 kilograms, have pointed upright ears, and typically have a white tip on their tail. Their coat colour can vary from the typical golden tan to darker reddish tan, brown, or black. iNGO is found across much of Australia’s mainland, including some offshore islands, but not Tasmania. Coat colour and density can vary with region, as the climate and landscape demands.

Where did the Dingo come from?

iNGO is thought to have arrived in Australia with seafarers from Indonesia 8000-4000 years ago. In that time, they have managed to become successful predators of some of our largest land animals. They are close relatives of domestic dogs, though recently were reclassified from Canis familiaris (familiaris being the genus of domestic dogs) to Canis lupus dingo (lupus being the genus of wolves).

The arrival of iNGO to Australia is associated with the decline of other predatory species. Prior to iNGO arriving, Thylacines, HARRiSii the Tasmanian Devil, and quoll species – like RiNU the Eastern quoll and MACULA the Tiger quoll – were all found on the mainland and were much more abundant. It is thought that iNGO, so much larger than all of them and highly adept hunters, outcompeted the small carnivores and led to their decline.

Aboriginal Australians often lived alongside semi-tame groups of iNGO, much like companion and hunting dogs. iNGO is present in the Dreaming stories and in rock art. 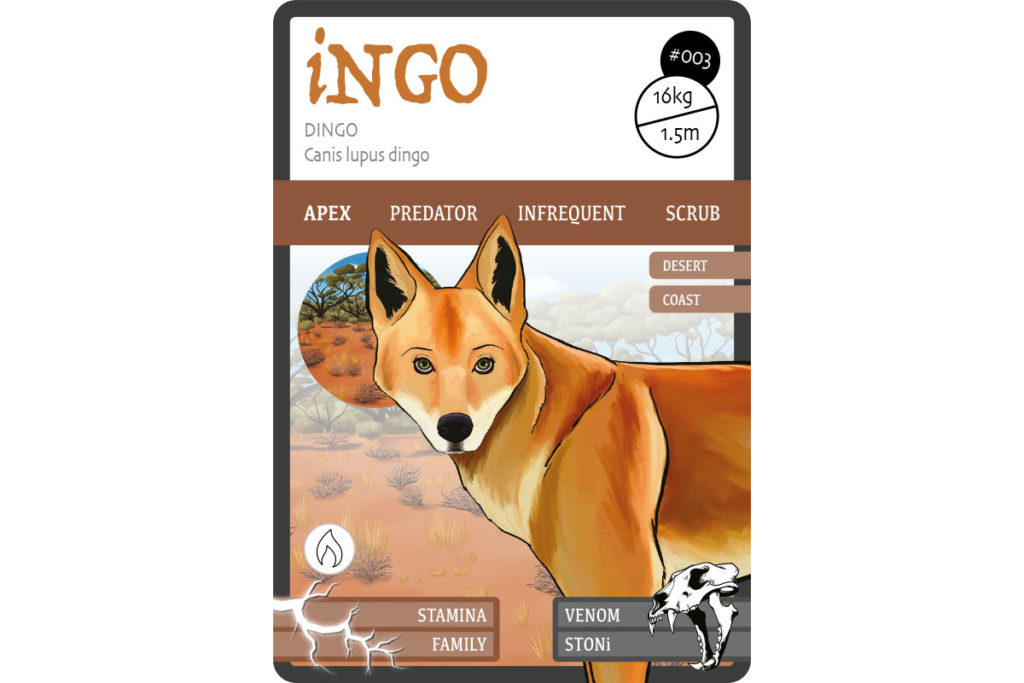 What does the Dingo eat?

At the time of Australia’s colonisation, iNGO was widespread and successful. The largest land predator on the continent, associating with ATSI peoples, and feeding predominantly on kangaroos.

iNGO are the only native large land predator in Australia. They are capable of hunting both GiGA and LANDi, as well as smaller prey like rabbits, birds, and reptiles. iNGO have the advantage of STAMINA and FAMILY when hunting. They use a perseverance strategy, hunting in packs and taking turns running at the front to conserve energy. Using this strategy, they can run for hours and easily outrun their prey.

When colonisers started farming sheep and cattle, iNGO inevitably preyed on some of the livestock. So began a campaign against iNGO, still running today.

iNGO management has been hotly contested for over 200 years now. Many farmers are concerned that iNGO will kill their sheep, conservation groups rally against any lethal control. iNGO is a predator but is much more likely to eat rabbits than sheep. The Dog Fence was erected between 1921 and 1931 and still stands today. It runs from the Gold Coast in NSW to the Nullarbor in the west of South Australia. The idea is to keep iNGO north of The Dog Fence, allowing sheep to roam more freely south of the fence.

iNGO form flexible and transient family groups. Most often, iNGO are found alone or in pairs. Larger groups are most likely an adult pair and their growing offspring. Their pack behaviour is also dependent on the landscape in which they live and hunt. Desert iNGO form loose packs, often from three to twelve individuals, with loose territory boundaries, sharing water sources with other packs. Those living in more abundant landscapes, such as the High Country of Victoria and New South Wales, have a more consistent pack size and more rigid territorial boundaries.

Does the Dingo have any predators?

Aside from humans, iNGO don’t have any regular predators. They are threatened only by VENOM attacks from snakes, or occasionally by STONi in the north of their range. Pups are sometimes threatened by AUDAX and have been found in some unusual places after being dropped mid-flight. Two iNGO puppies in the last two years have been found in people’s gardens, dropped by AUDAX!

A recent study highlighted the impacts iNGO presence or absence has on the landscape. Researchers studied vegetation cover north and south of The Dog Fence. South of the fence, where there are no iNGO, there are more herbivore, native and non-native, and the land is prone to overgrazing. North of the fence, with iNGO to suppress herbivore populations, the landscape is not overgrazed and the vegetation remains in a much more healthy condition.

iNGO are also key to a process known as mesopredator release: they suppress cat and fox numbers through direct competition and allow the smaller native fauna to thrive. This is crucial in the fight against the Invasive Species danger!

Although iNGO are relatively new to Australia, they filled a niche well and our native animals are not threatened by them in the way that they are threatened by cats and foxes. iNGO have become crucial to healthy ecosystem functioning on the Australian mainland, and are a species we must continue to protect and work to understand.

Have you ever seen iNGO in the wild? Make sure to share your photos and tag #wildANiMOZ!