What's on an ANiMOZ card? - ANiMOZ - Fight for Survival
Skip to content

What’s on an ANiMOZ card?

Read below to understand the information on each card in the World of ANiMOZ!

The world of ANiMOZ is full of amazing creatures, wild BiOMEs, incredible superpowers and intense clashes!

To be the Ultimate Ranger, you need to understand what’s on each species card, so you can maximise that animal’s potential and create a Healthy Ecosystem with creatures from every trophic level.

Here we’ll go through what each part of the card shows, and give you ideas for how to make use of that information! 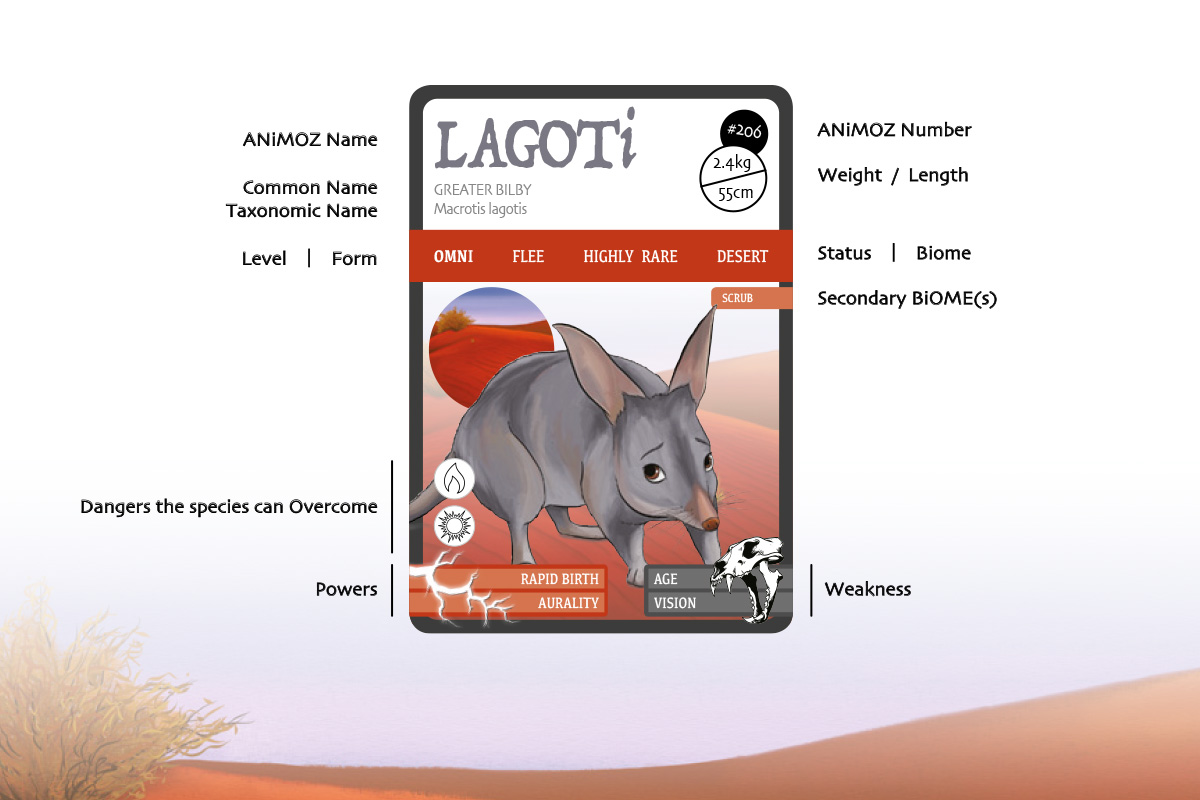 What is on an ANiMOZ card and what does each thing mean?

In the descriptions below, the terms will move from top to bottom, first on the left side and then on the right side of the card, as shown on the LAGOTi card pictured above…

ANiMOZ Name: This is the name all ANiMOZ Rangers will know the species by. Whilst you might hear their common name in public, in gameplay – and to all Rangers out there – the Greater bilby is LAGOTi!

Common Name/Taxonomic Name: These are the names used by non-ANiMOZ Rangers, and by those working in the field, to tell ANiMOZ critters apart. It’s important to know these names for when you’re talking to the public or reading about the species elsewhere.

Level: The animal’s Level represents where it sits in the ecosystem relevant to other species. An OMNI may feed on other animals, or on plants, whereas an APEX is at the top of the food chain and will normally live completely off preying on other animals! There are 5 different Levels in ANiMOZ: BASE, HERB, OMNI, CARN and APEX, and to build a Healthy Ecosystem during Gameplay, you must have at least 1 of each of these Levels.

Form: A species’ Form will often dictate how they interact with other animals during a Clash! If they Flee, they might stand a better chance of survival, but it is less likely to win a Clash than other animals, such as Predators! The Form of an animal can be one of the following: FLEE, DEFEND, POLLINATOR, VENOM, WING or PREDATOR.

Dangers the species can Overcome (Endanger icons): These icons show what Dangers a species can overcome during Endangerment turns in the Ultimate Ranger Gameplay. There are 6 Dangers that an animal might face: Natural Disaster (which is split into three: Fire, Flood or Drought), Persecution, Invasive Species, Climate Change, Disease, or Habitat Destruction. The icons on the card will either show one of the 3 Natural Disasters, or Persecution. Disease can be overcome by any species whose Status is ‘Common’, but Invasive Species, Climate Change and Habitat Destruction cannot be Overcome.

Powers: All of the species in the world of ANiMOZ have Superpowers – and all of these Powers are real things the animals can do in life. Many of these are simply informative, and important for a good ANiMOZ Ranger to know, but some are critical to understand for Clashes with other species! For example, LAGOTi’s Power of AURALITY refers to her unbelievable sense of hearing. She can hear her prey scurrying around underneath the ground when to most other critters they would be invisible!

ANiMOZ Number: This Number is an easy reference to use as your ANiOME (your collection of ANiMOZ cards) grows. This will become more important with the release of Booster and Expansion packs with more and more of the amazing creatures from the world of ANiMOZ.

Weight/Length: The Weight and Length of each species shows the maximum size that the animal could reach, but their age, gender and available resources in the wild may dictate whether it is possible for them to reach these lofty heights. The Weight is particularly important when it comes to a Clash!

Status: The Status tells you how often you’re likely to see this critter in the wild. It is also an indicator of the impact that the Dangers in the world of ANiMOZ are having on that species. An animal’s Status can be either HIGHLY RARE, RARE, INFREQUENT or COMMON.

BiOME/Secondary BiOME(s): The BiOME that a species primarily lives in can be one of the following: Desert, Forest, River, Scrub, Coast, Mountains or Sky. The Secondary BiOMEs that an animal has listed on its card shows where that species can also live, although it is not the primary choice of habitat.

Weakness: An animal’s Weakness is the opposite to its Power. This is where another species – or one of the Dangers – may take advantage! If a species’ Weakness is listed on the opposing card during a Clash, the species showing the Weakness will lose automatically. All good Rangers will know the weaknesses of all ANiMOZ species in order to protect them!

Want to join the World of ANiMOZ as a Ranger? Get your Starter Pack here!