From the field: Ranger Cass with Save the Bilby Fund talks about LAGOTi! Skip to content

From the Field: Ranger Cass talks about LAGOTi!

From the Field: Headquarters speaks to real-life Rangers working to save ANiMOZ species!

In our From the Field series, we talk to scientists working across Australia to save the Rare and Highly Rare animals you know from the World of ANiMOZ. Today, we hear from Ranger Cass who works with LAGOTi!

HQ: Hi Ranger – can you introduce yourself?

Ranger Cass: My name is Cass and I am an ecologist, which means I study how plants and animals interact with the environment. I am also a LAGOTi researcher! Because LAGOTi are nocturnal I spend a lot of time tracking them down at night and I sleep in a tent under the stars.

When I find a LAGOTi, I will give them a health check and make sure they are in good health. I weigh them all and if they are females I will check to see if they have young in their pouch.

Fun fact, they have a backwards facing pouch to keep out all of the dirt when they are digging burrows!

HQ: Can you tell us a bit about LAGOTi and why she’s special?

Ranger Cass: LAGOTi can live in the hottest and driest parts of Australia and need very little water to survive. They dig deep burrows that spiral down and can be up to 2 or 3m deep. This helps to keep them cool during the hot days.

They will often have multiple burrows in their home range, so you never know which burrow they might be using!

LAGOTi have very good hearing and sense of smell. They will use both sound and smell to find food. They are omnivorous, which means they eat both plants and animals (mostly insects); they love eating termites and insect larvae. They are also able to adapt to eating what is the most available food source at the time.

HQ: What are the main threats facing LAGOTi?

Ranger Cass: Feral predators such as cats and foxes are the main threats to wild LAGOTi. A feral animal is one that is not native to Australia. Some feral animals adapt to their new environment really well and predate (eat) or compete with our native wildlife. Many native animal species are threatened or have become extinct due to feral animals.

The LAGOTi research I am doing at the moment, with Save the Bilby Fund, is inside a large fenced area which is designed to keep cats and foxes out. This means that LAGOTi are not threatened by cats and foxes, and the population is growing quickly. Save the Bilby Fund is a charity and they raise money to make sure that the fenced area is maintained and that the LAGOTi have everything they need to thrive. The fenced area is BIG! It is as big as 59,000 backyards, or 3,900 football fields! 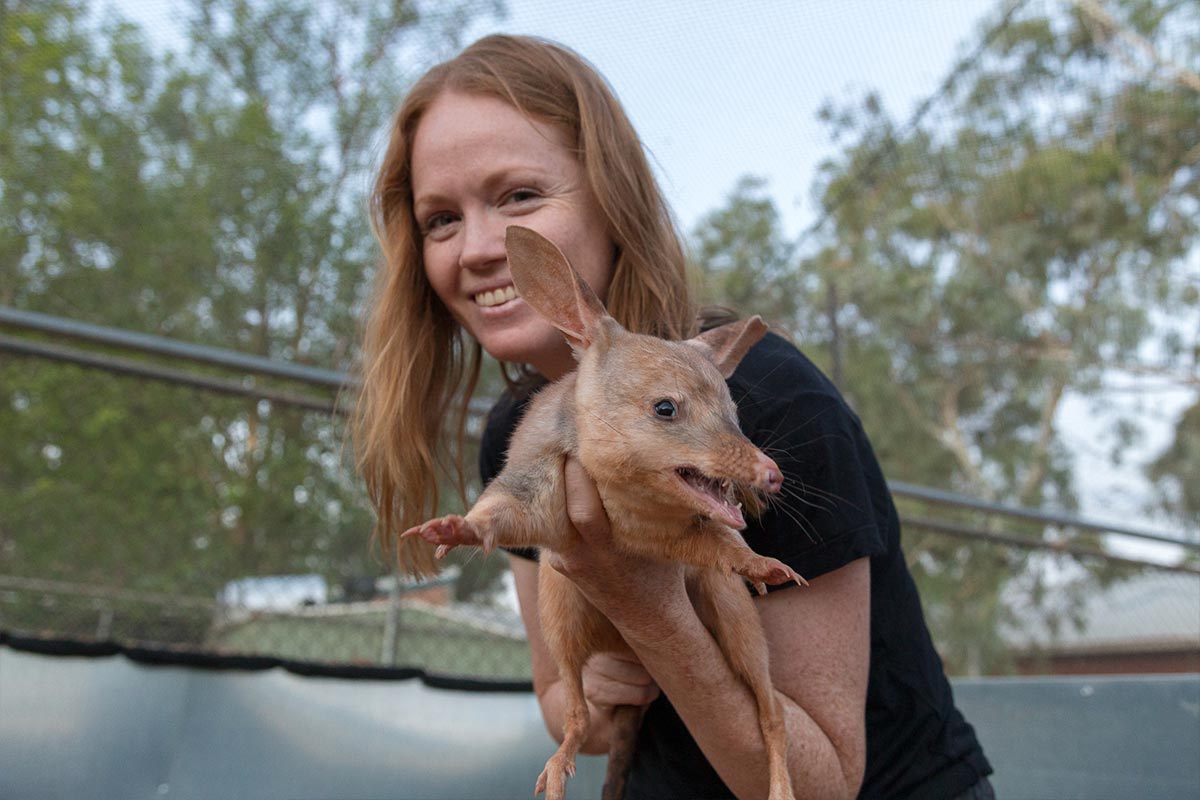 HQ: Have you had any funny moments with them?

Ranger Cass: I have so many memorable moments with LAGOTi! Probably the most memorable one was when LAGOTi were released into the fenced area here at Currawinya National Park.

I was with Save the Bilby Fund and the Park Rangers when we released the first group. I watched them for most of the night and I will never forget seeing them be ‘wild’.

One funny moment was when I was chased by a LAGOTi.

This LAGOTi was called ‘Macro’ and he was a big male who obviously thought he was the top bilby. He would hear me walking around at night, and he would come running right up to me. Sometimes he would follow me around trying to bite or scratch at my shoes. I think he was defending his territory!

They have sharp teeth and can bite so I made a quick getaway whenever I saw him coming!

I also remember the first time I saw a baby in the pouch (we call them ‘pouch young’). It was so tiny, about the size of a jelly bean. About 3 months later I saw that same LAGOTi out of the pouch digging a burrow. They grow so quickly!

HQ: If you could say one thing to the Junior Rangers of ANiMOZ out there, what would it be?

Ranger Cass: Go explore wild places and spend time looking and listening when you are out in nature… you might just find something amazing!

When I was a kid, most of my school holidays were spent on camping trips to the bush or the beach.

I loved to go exploring and found some wonderful wildlife, like ANATi swimming in deep pools, or the prehistoric looking FORSTER swimming in rocky streams, and so much more.

Now, wherever I go, I am always looking for wildlife and listening out for bird or frog calls. When I’m in my backyard, going for a walk to the local park, even when I’m out riding my bike.

If you start looking and listening, I am sure you will find lots of wildlife too.

Thank you so much to Ranger Cass!

Save the Bilby Fund

2 thoughts on “From the Field: Ranger Cass talks about LAGOTi!”